Showing posts with the label Kasol is the Himalayan Hotspot for backpackers and acts as a base for nearby treks to Malana and Kheerganga.
Show All

Kasol is the Himalayan Hotspot for Backpackers 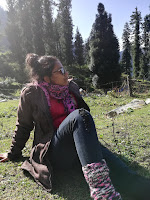 Kasol is the Himalayan Hotspot for backpackers and acts as a base for nearby treks to Malana and Kheerganga. It is also called as the Mini Israel of India. Kasol has a good weather throughout the year. It snows from late December to February. Kasol Music Festival is a festival which happens on every New Year's Eve where people from all over the world gather just for this festival. There are different transport available to reach Kasol. To reach Kasol, you must reach Bhuntar from where you have the option to use the Bus Service which is available every hour between 8AM - 6PM. Arrive at Hazrat Nizamuddin Railway Station if you are traveling by train or at Indira Gandhi International Airport (DEL). If you wish to travel to Kasol by bus, take a Taxi, Rick or Metro to Kashmere Gate.(Kashmere Gate ISBT has a Bus Terminal  operating buses to many states) If you are a group, you may take a private vehicle to go to Kasol. Delhi to Kasol by road is 511 kms and it takes around 13/14 hours.
Post a Comment
Read more
More posts