Showing posts with the label #mathuradiaries
Show All 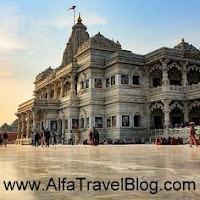 Mathura Mathura is known for the birthplace of Lord Krishna. He was born in Mathura and was born in Vrindavan. He spent his childhood in Vrindavan. After killing Kansa, he became the king of Mathura. India is a country of immense diversity in all walks of life, from religious to cultural and historical. Religion is deeply ingrained in the Indian lifestyle as far as one cannot remember, which is why India lives in cities and towns across the country dedicated to fulfilling the spiritual desires of those who are far away. - Come to these places from far away. . Mathura is a place that is considered one of the holiest lands in India and is filled with people seeking spiritual knowledge at any time of the year. Situated at a distance of about 150 km from Delhi, Mathura is known as the birthplace of Lord Krishna and has many sites of both historical and religious significance. The Sri Krishna Janmabhoomi is the most famous tourist attraction in Mathura, as this place is considere
Post a Comment
Read more
More posts