Showing posts with the label #kolkatafood
Show All 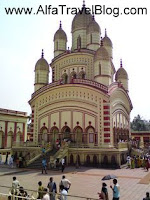 Best Places to Visit in Kolkata, Visit Kolkata by Alfa Travel Blog o    Kolkata o    How to Reach o    Places to Go o    Where to Stay o    What and Where to Eat o    Best Time to Visit It is the city of joy, this is the city that does not lack behind in any field whether it be sports or education, they need their mark to loud and clear. Kolkata has been called the "City of Furious, Creative Energy" along with that it is also known as the "cultural [or literary] capital of India". The beautiful time during the Durga Puja festival, to the vibrant market in the city everything would capture the attention. This is the 3rd most populous metropolitan city with a current population of 45 lakh according to the 2011 census. Kolkata (formerly Calcutta) is the capital of the Indian state of West Bengal. It was India's capital under the British Raj from 1773–1911 and founded as an East India Company's trading post. Today it’s known for its g
Post a Comment
Read more
More posts