Showing posts with the label #jimcorbettnationalpark
Show All 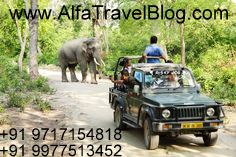 JIM CORBETT (AN ADVENTURE'S JUNGLE ADVENTURE) Land of beauty and incredible contrast It is located in the rugged Himalayan foothills in the districts of Almora, Nanital, and Paurigharpal of Uttarakhand state of India.   It was established in the year 1936 as Hailey National Park (to protect the endangered Bengal Tigers) on behalf of Governor of the United Province (now U.P) Sir Malcolm Hailey, again in 1952 it is named as Ramganga National Park and finally in 1957 it is named as Jim Corbett National park. it is named after great British tracker, hunter and poacher who hunt for man-eating tigers and leopards. Corbett National Park has 110 species of trees, 51 species of shrubs and over 33 species of grass. Area:-1288.36sq km It is Indias oldest and richest treasure. There are no boundaries and borders. The presence of otters in ram Ganga river clearly signifies that the water is free from pollution. Ram Ganga river is the home of descendants of prehistoric reptile
Post a Comment
Read more
More posts