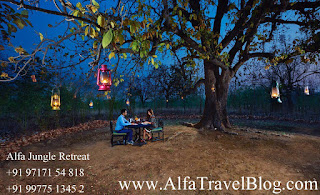 THE PENCH NATIONAL PARK Also known as " Pench Tiger Reserve " or "Mowgli Land". It is named so as it is situated beside river Pench. It is locate in "Seoni" district of Madhaya Pradesh which is exactly 60km away from pench. Originally labelled as sanctuary in 1977, Pench became a National Park in 1983. In 1992, it was established as a tiger reserve, and in 2002 it was christened as the Indira Priyadarshini National Park. Pench Madhya Pradesh covers an area half the size of Mumbai City that is 293sq km. It is located just beside the NH7. According to tiger sensus only 40 tigers are residing here. Night Safari is also available here which is closed during rainy season . There are 46 forest guards in Pench National Park. The natural richness of the park has been mentioned in Ain-i-Akbari, the 16th-century document chronicling the reign of Emperor Akbar during the Mughal era. Pench national Park is very rich in fauna- Some of these are-: Tiger, Leopard, Jun
1 comment
Read more
More posts