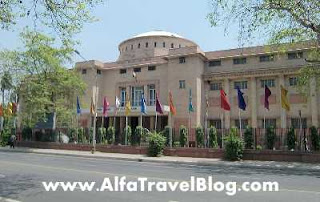 Delhi The Culture of Delhi Places to visit in Delhi Best time to visit Delhi How to Reach Delhi Food of Delhi Hotels in delhi The capital of India, Delhi is a metropolitan city with a historic Old Delhi and modern New Delhi. From historical monuments to crowded shopping malls, the wide network of modern metro systems to Delhi University campus, Delhi has many personalities and is considered a heart city. The narrow, winding streets and suburbs of Old Delhi are a testament to the former Mughal rule. Old Delhi has the oldest and busiest market in the country - Chandni Chowk. If you want to explore the Mughal history, explore historical monuments like Red Fort, Jama Masjid, Humayun's Tomb and Purana Fort. Delhi has famous temples across the city, some notable of which are the Akshardham Temple, the Lotus Temple (also known as the Bahá'í Temple), and the ISKCON Temple. Central Delhi is the density of political power in the country, and the places of visit he
Post a Comment
Read more
More posts